„Ghostbound – Love is Stronger than Death“ by C.M. Singer – FOR FREE from June 4th till June 5th

Band 1: „Ghostbound – Love is Stronger than Death“ by C.M. Singer

This book follows the love story of Elizabeth and Danny. They meet in the most inconvenient way that puts both of them in an immediate bad light. You see, Elizabeth is a journalist of the Sun and was ordered to write an article about the teenage murders. There are eight of them and Daniel Mason and his partner are the detectives on the case, so of course they aren’t all that happy to find a journalist lurking around the house of one of the victims. (Not that Elizabeth herself was all that happy to find herself in that situation, mind you.) Luckily they manage to look past that and they hit it off quite well later on. Elizabeth hunts Daniel down to his band’s performance in a club and they start talking and talking and talking. Elizabeth can’t really believe that the rude detective that made such a fool of her earlier, was actually a kind and funny man. (Not to mention incredibly HOT!) Elizabeth thanks her lucky stars that she followed him to the club as they talk the night away. Unfortunately good things aren’t meant to last for our Elizabeth, because as soon as they leave the club they’re ambushed by a group of three. They leave Elizabeth bruised and scared shitless, but alive. Whereas they stab Danny brutally and leave him for death. Are these the same murderers that he had been investigating? Did he come too close to something? Why is it that she can see his ghost when nobody else can? And why do her feelings only grow stronger for the handsome detective? Surely a ghost and a human could never work? Could they? Elizabeth really doesn’t care, she’s just happy to have him back in any way she can. It only determines her resolve to find Daniel Mason’s killers…

Alright, I liked this book. It’s not one of my all time favourites, but it was okay as far as books went! Elizabeth was a sweet character and my heart really did feel for her. She didn’t deserve half the things fate threw her way, but she handled them all with grace. I quite liked Danny as the love interest and hero of the story. He was incredibly sweet, not to mention funny. He had me snorting with laughter more times than any of the other characters in this book. The secondary characters were interesting as well, Detective Wood was kind of an asshat at the beginning of the story, but he’s quite easy to love. I would have liked to learn more about Elizabeth’s friends and her background story though. This is the first book of a popular German trilogy, so surely we’ll get to learn more about Elizabeth’s history in the second book?

I generally liked how Singer handled the mystery of the murders in this book, although I have to say that some things seemed to be a little too convenient. There’s a problem? Let’s add a character that just so happens to know the answer! (This is why I’m giving it 4 stars instead 5.) But that’s probably just me though. I like to see my heroine suffer a little as she fights the system and tries to solve her problems. (Yes, I’m mean like that.) Don’t let this make you think that this book is a walk in the park for our Elizabeth. She does struggle to keep her head above the water as she tries to find out her beloved Danny’s killers.

This book is told in third POV, which I usually find bothersome. It makes it hard to connect to the main character, but I didn’t experience it so with this book. Elizabeth is just the kind of character that you can’t help but feel for. It took me a couple of chapters to get into the book though, but as soon as I did I was completely hooked. The more the story progressed, the more I started to love it. I’d definitely recommend this one! 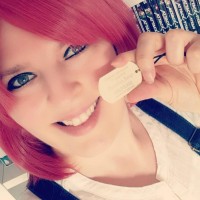